Quick announcement: Tomorrow’s Sinica Podcast recording will be livestreamed! Check our social media channels (Twitter, Facebook) for the broadcast link, and tune in at 6:00 p.m. EST, December 4, to catch our conversation with Jude Blanchette reflecting on the 40th Anniversary of Reform & Opening in China.

At the Xi-Trump dinner in Argentina on Saturday, December 1, both presidents called the meeting “highly successful.” In published remarks before the meeting, Xi even returned Trump’s bromides about the two leaders’ “personal friendship” for the first time.

Both sides also said that they had agreed there would be no increase to tariffs on January 1, but beyond that, the details are sketchy because there was no joint statement.

Nonetheless, Wall Street and global markets rallied. Even in my far-away native land of South Africa, the news of the temporary cessation of hostilities is moving money. Business Day (South Africa) reports that the South African rand “was firmer” today, “cheered by global interest in risk assets, after the U.S. and China agreed to a 90-day truce in their trade war.”

What an excellent illustration of the fundamental idiocy that can drive the markets. I think Jamil Anderlini in the Financial Times has it right (paywall):

Since it is virtually impossible for Mr Xi to implement or even agree to such far-ranging changes to China’s economy, it is almost certain that the trade war will resume with a vengeance.

2. A new account of the alleged Richard Liu rape

The circumstances of the alleged rape of a Chinese student in Minnesota by Richard Liu (刘强东 Liú Qiángdōng), billionaire founder of ecommerce giant JD, are the subject of a new account compiled by Bloomberg (porous paywall) which begins thusly:

It was a Thursday evening in late August and a crowd had gathered at the Origami sushi restaurant in Minneapolis. One guest, a 21-year-old female Chinese undergraduate at the University of Minnesota, was initially expecting a dinner in honor of volunteers like herself.

Instead, she found herself surrounded by more than a dozen Chinese executives, male attendees of a doctoral management program for which she had been volunteering.

Bloomberg says the story is based on documents including the alleged victim’s statement to the police, her WeChat messages to a friend, “which were reviewed by Bloomberg,” and a conversation with her lawyer. There is no substantial new information, but the article does offer a detailed account of the evening from the alleged victim’s point of view.

Liu’s lawyer responded to the account: “This version of events is filled with unsubstantiated information, from sources who clearly have an agenda.”

The Minneapolis Police Department handed its investigation results to prosecutors in the Hennepin County Attorney’s office. Prosecutors have not yet announced whether they will file criminal charges.

The home pages of central state media websites today share a conspicuous absence: there is no mention of the trade war truce.

You can find some coverage of the Trump-Xi meeting, with photos, on Xinhua’s Chinese site: the article is simply titled “Xí Jìnpíng 习近平 meets with U.S. President Trump.” The Global Times English website features an opinion piece titled “Trade war truce sends significant signal.” The editorial does not make it very clear what the significant signal is, but this paragraph just about sums the whole piece up:

The truce shows both sides have realized that it would be more beneficial for them to end the trade war than to continue it. Washington’s understanding on this point is no less than that of Beijing. It’s almost impossible to overcome the huge differences between the two sides in 90 days. But it’s highly likely that 90 days of effort could build a certain trust and lead to compromises that are acceptable to both.

Xinhua News Agency, the People’s Daily, and Global Times’ websites all feature a version of this story: Chinese president arrives in Panama for state visit (Chinese version here). The official articles do not mention it, but the South China Morning Post points out that the visit is something of a victory lap for Xi Jinping:

The warm ties follow Panama’s diplomatic break with Taipei in June last year. Since then, two more Central American countries — Dominican Republic and El Salvador — have this year also made the diplomatic shift. The new friendships are a result of efforts to lure countries with formal relations with Taiwan… to switch their allegiance to Beijing.

Also prominent in state media today: the full text of Xi’s signed article in a Portuguese newspaper on the occasion of his visit to Lisbon, the last stop on his current world tour (Chinese version here).

Reflecting on Xi’s visit to Latin America and China’s growing presence there, the Global Times Chinese website features a story titled “The United States should destroy the tomb of the Monroe Doctrine.” Translated excerpt:

However, the era of the Monroe Doctrine has indeed ended. Latin American countries have legitimate rights to develop mutually beneficial cooperation with China and other major countries in the world. The United States lacks the basic moral and legal tools to prevent such cooperation. Therefore, restraining its strategic suspicion of China-Latin America cooperation is Washington’s best choice to reduce unnecessary troubles.

At the Xi-Trump dinner in Argentina on Saturday, December 1, both presidents called the meeting “highly successful.” In published remarks before the meeting, Xi even returned Trump’s bromides about the two leaders’ “personal friendship” for the first time.

Both sides also said that they had agreed there would be no increase to tariffs on January 1, but beyond that, the details are sketchy because there was no joint statement. The American statement on the meeting, via the White House, and the Chinese statements, via Xinhua readout and Foreign Minister Wáng Yì 王毅 (in Chinese), have marked differences. Caixin has a helpful comparison of what the two sides are saying: 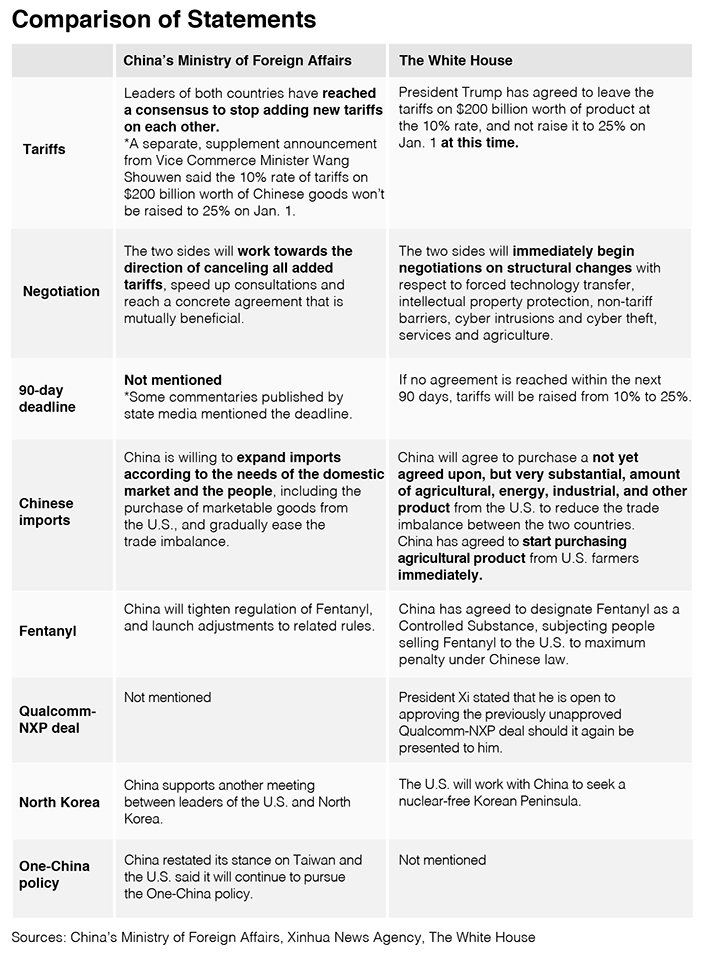 China scholar Elizabeth Economy commented on the differences in statements, “Hard to know what’s true and what’s not since neither leadership has a close relationship with the truth.” The Economist magazine sums up (porous paywall) the result as “some murky mercantilism, and a deal to talk about a deal.” The number of issues that the two sides now have to negotiate before Trump’s patience again wears thin is “ambitious, particularly when levels of trust between the two sides are so low,” the Economist says.

More interesting, and new, are the discussions of fentanyl, noted at the top of the White House statement and the middle of the Xinhua readout. Xinhua notes that “China has decided to list all the fentanyl-like substances as controlled substances and start working to adjust related regulations.” This appears to be an important goodwill gesture, as the man at the forefront of trade negotiations, U.S. Trade Representative Robert Lighthizer, had reportedly (paywall) been saying in White House meetings that “Beijing was getting even for the Opium Wars between Britain and China in the 1800s by shipping fentanyl to America.”

More coverage of the Trump-Xi meeting and the trade war:

Giant panda Gao Gao, who is 28 years old, stayed at the San Diego Zoo in the U.S. for 15 years before returning to China.

Crazy Rich Asians, with its majority-Asian cast, was both a critical and commercial success in the U.S. upon its release over the summer. But its reception in mainland China has been decidedly muted, as it brought home a meager $1.2 million over the weekend after its November 30 debut. But what did those who saw it think?

Let’s talk internet censorship. Why does the Chinese government believe it necessary? How do people within China feel about it? Can “heroes” rally together to break the Great Firewall, thus “freeing” those trapped within? Kaiser Kuo discusses these questions in this week’s Kuora, and introduces his famous “aluminum foil” analogy.

This week on Sinica, Kaiser speaks with Charles Bedford, who has been managing director since 2012 of The Nature Conservancy (TNC)’s Asia Pacific region, which encompasses Asia, the Pacific Islands, Indonesia and Australia. The organization focuses on solving incredibly pressing and paramount issues central to the health of our planet. TNC is a charitable environmental organization that focuses on bringing the “best available science” to decision-makers in all levels of government and local communities both inside and outside of the United States.

A father plays with his daughters in a public square in Linyi, Shandong Province. Photo by Daniel Hinks.

Do you have a China-related photo you want to share with the world? Send it, along with a bio and headshot of yourself, to jia@supchina.com and you may see it posted as our photo of the day!